Even though Tesla has been very successful in the past few years, it still can’t match the success of companies like Audi or Mercedes. In order to become more competitive, it seems that Elon Musk will release not one but two all new cars. The Model 3 is the one everyone is talking about but there is another one in the works. The Tesla Model Y has been first mentioned by Elon in a tweet and since then not much was said about it. However, it seems that the Y might be the car that will allow Tesla to finally become a true contender on the market. The Y is expected to be a mid-size crossover based on the 3 sedan. This means it will be smaller and less powerful than the Model X but despite that it should still be quite impressive. Not that long ago Elon said that this should be the car to allow them to reach as much as 500,000 to 1,000,000 sales per year in the upcoming decade. This sales volume would put Tesla roughly at the same level with Audi which would certainly give them a boost. The Model Y is expected to be so successful because it will be an all electric crossover that will cost nearly as much as the 3 sedan. 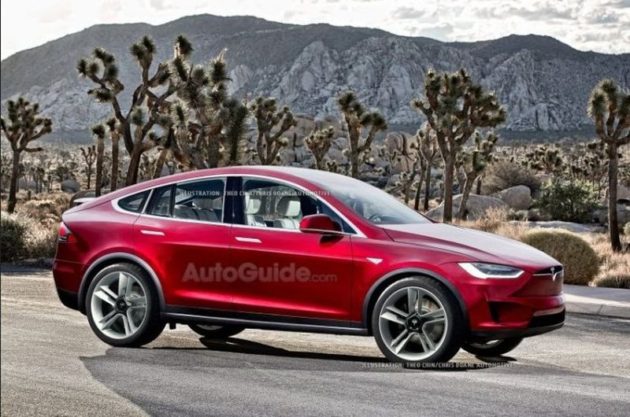 While the Tesla Model Y would have likely became the best selling car a few years back, when it will be released in around 4 to 6 years it will have to face some serious competition. This makes us think that Elon’s target of more than half a million units a year is a bit much. When it will be released there are going to be a lot of other cars that will offer similar mileage, a better known badge and even better build quality.

How will Tesla Model Y look?

So far there is nothing out there about the Model Y. It seems thought that it might take the coupe-inspired shape from the X, only on a smaller scale. The end result might be something similar to the BMW X4 while having the benefit of an all electric powertrain. Expect it to not have a usual grille in order to keep up with the rest of Tesla’s corporate design. The electric powertrain will also allow for a front trunk and more space inside the cabin. Thanks to that and despite its coupe-inspired shape, it should be a lot roomier inside than some of its competitors.

While it may seem strange for some to call the car the Tesla Model Y, there is a reason for that. So far Elon released the Model S, the X and soon enough the 3. With the release of the Y, Tesla’s roster will include the S, 3, X and Y models which is a really clever way of basically advertising the company to the younger generation.

How good will it be?

It still is quite early to say much about how good it will be. However, there are some interesting facts about it. The Model Y will likely be the first all electric crossover to cost around $40,000 to $50,000. On top of that, thanks to Tesla’s technology, it should outrun most of its rivals as well. The car will likely only be sold as an all wheel drive model with outputs ranging from around 250 to more than 300 horsepower. This might not seem much but thanks to the massive amount of torque it should be good for a 0 to 60 MPH time of less than 6 seconds. The range will likely rival that of the Model 3 having the benefit of all wheel drive.

While we wait for Tesla Model Y let’s take a look at Model X:

Earlier this year at a Tesla meeting some interesting details have been revealed about the future of the company. In …