Since the very first generation of this masculine mid-size pickup has seen the daylight, five years ago, the vast majority of us, true and devoted car lovers, were, literary, thrilled when we saw what exactly this mighty pickup is able to do. It has, simply, stunning off-road suspension that come along matched with widened fenders and nearly 35-inch tires-these features enabled for this amazing F 150 Raptor magnificent performance, which, almost, border with possible. On its widely popularity, didn’t even affect, somehow, expensive price! The Americans simply adore their beloved F 150 Raptor. Because of that it is no surprise that they are ready to launch brand new version of this pickup truck- 2017 Ford F 150 Raptor. So, for Ford’s brand new, 2017, edition of this masculine pickup is intended to suffer only some minor refreshments and a certain upgrades, in order to stay in the race with its main competition. 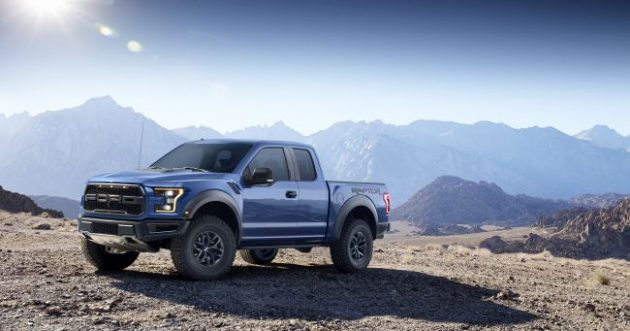 The engineers from Ford have been utterly dedicated, even for months now, worked on redesigning its chassis, in order that brand new variant comes along with, somehow, the special, fancy and very trendy bodywork, which will be, at the same time, fully made of an aluminum. In order to achieve their goal, they reinforced the Raptor’s new boxed steel frame and it is planned to come in two sizes: the sportier on that will have a 133-inch-wheelbase and will be known as a Super Cab and the roomier one, of an average width of a 145-inch, which will be known as a Super Crew. 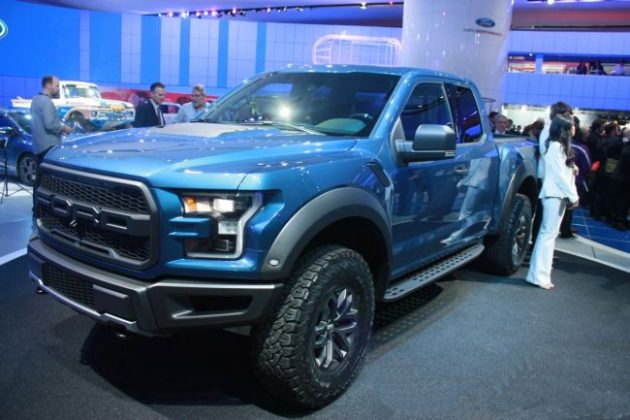 The Ford’s geniuses even manage to incorporate the fancy new materials in the 2017 Ford F 150 Raptor rippling body in the pretty clever way, that these materials imbue its general appearance. Ford’s brand new variant is planned to be about 6 inches wider than the current available model. The designers did that, in order to improve the Raptor’s off-road stability. Regarding the rest of the stuff, which have suffered certain, mainly minor, refreshments and upgrades, the following one is the most important: front and rear ends, as well, newly designed 17-inch wheels shod in next-generation Goodrich All-Terrain KO2 tires that have been, especially designed for off-road performance. The worth of mentioned, certainly, is that the 2017 Ford F 150 Raptor will have, at the very first time in its history, a dual exhaust. 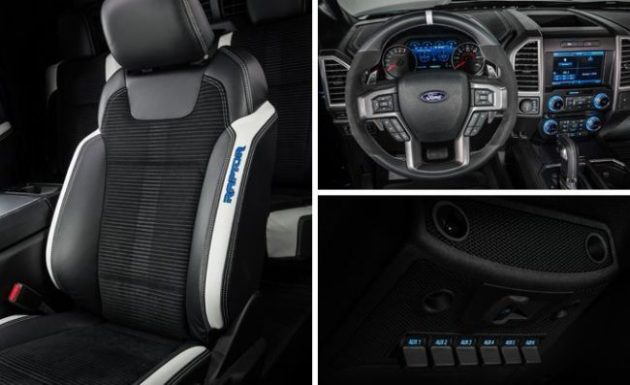 Engine wise, according currently available data, this area shouldn’t suffer any major changes. That, practically, means that the 2017 Ford F 150 Raptor, still, will be equipped with the well-known a twin-turbocharged 3.5-liter V-6 engine with direct fuel injection, although its, somehow, upgraded features (like newly designed aluminum block tweaked fuel-delivery equipment, upgraded internals and revised heads) will, surely have a huge impact on overall fuel savings, although it isn’t “the best virtue” of which the 2017 Ford F 150 Raptor can brag.
However, the final output figures haven’t been officially announced just yet, but, let’s say that you can, surely, count on 450 to 500 horsepower and on more torque than the current V-8’s 434 lb-ft.

We have, already, mentioned that brand new 2017 Ford F 150 Raptor won’t be that cheap. You can have it for, roughly $50,000. It is planned that this brand new variant experiences its premiere on next year’s Detroit Motor Show.