Ever since it was released nearly half a century ago the Corvette has always been a front-engine super-car. Despite that not many people know that GM also liked the idea of a mid-engine Corvette and that they even released prototypes for it. After more than 50 years of front-engine Corvette though it seems that things are going to change. A while ago a prototype of the 2019 Chevrolet Corvette C8 has been spied and to everyone’s surprise, the car had a mid-mounted engine. This is a huge departure from the current standard but it seems it is a departure for the better. The Corvette is set to become the first mass-produced American super-car with a mid-engine which will definitely help its cause to compete with the European rivals.

So far the prototypes seem to have a shorter wheelbase than the ongoing model. This will help the car with high speed cornering and it should make it more fun as well. On top of that, the ancient suspension system of the C7 is finally going to be gone. In its place Chevrolet is expected to use a push-rod suspension setup. This will allow the car to corner at higher speeds while also being more controllable than before. This suspension setup also allows for a lower car at the expense of interior space. The price for the new car hasn’t been announced but we wouldn’t be surprised if it ends up costing north of $100,000 for a base model.

So far no official information regarding 2019 Chevrolet Corvette C8 release date hasn’t been published. It is expected for this sports car to make its debut somewhere in 2018. The C8 will come as 2019 MY and that is why we expect for it to debut closer to the end of 2018 rather than in first half. 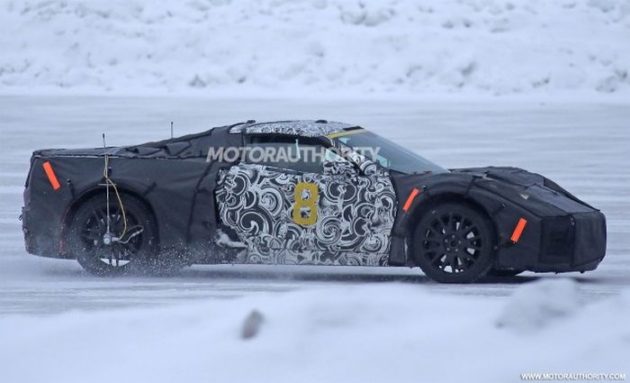 The design – inside and out

The interior of the 2019 Chevrolet Corvette C8 is still well under wraps but we do have an idea. While we don’t expect the cabin of the previous model, we do expect some design cues to be carried over. The driver-oriented layout or the two-seats cabin will stay. The new model will likely receive a better fit and finish as well as better materials. The driving position is also going to be lower than that of its predecessor but there should be slightly more room available for the two passengers.

The car’s exterior will be nothing like that of its predecessor. For starters, the front end is going to be noticeably shorter while the back will be both wider and longer. The overall height is definitely going to be lower but the car will still be as aggressive as ever. In the front it seems that it will take cues from the current car but the rear end will be all new. Here it seems that it boasts quad-tail lights and quad-exhausts mounted at the bumper’s extremities.

Engine bay – Under the Bonnet

The early rumors about the 2019 Chevrolet Corvette C8 suggested a 3.5 to 4.0 liter engine aided by two turbochargers. While we wouldn’t be surprised to see such an engine in the future, the release model will likely differ. Not that long ago Chevrolet finished the development process for a new naturally aspirated V8 engine which is likely between 5.0 and 6.2 liters in displacement. This would be their first DOHC V8 in a good while and it is expected to power the C8. The engine will likely offer north of 600 horsepower and 450 lb-ft of torque and it should be perfect.

Why? Well, this type of all-aluminum engine is light and high-revving in nature, so perfect for a mid-engine super-car. As standard we do expect a 10 speed automatic and rear wheel drive. In the future Chevrolet might also offer a 6 or 7 speed manual as an option, especially since their competitors do offer a manual option. Higher output engines or different engines altogether are expected to be released in the future. We wouldn’t be surprised if Chevrolet decides to offer 700 to 800 horsepower twin-turbocharged V8 engines, especially since the market allows this much power.